B is for Black cat.

We black cats are among the friendliest cats around. If you just get to know us, we'll purr for you and keep you good company. This site celebrates Black Cat Appreciation Day every August; just look at Friendly's posts from 2014 or 2015. Let's not forget the other posts, such as the one from Shadow Owens in 2014 or the one from Ruger and Tippi in 2015. You can probably count on more this coming August.

Our human first met black cats when my Long-haired Mama and her short-haired black friend were left behind at the red house. These were the first black cats he knew. (Well, maybe one of the neighbors had a black cat he met when he was a child. But he had an orange and a calico to keep most of his cat interest at the time.) Then there were a lot of black kittens born. Some disappeared, some were rehomed. I stuck around with my sister Inky, and he took the two of us to be fixed when Butler and Parker were fixed. After Butler crossed the Bridge, the human was thinking of taking me with him when he left the farm. But I disappeared in July while he was planning, and Inky did not want to go inside the cabin the one time he tried, so he decided to take only Parker. I was back with the farm by the time he came to get her.

True, it is a little harder to tell us black cats apart. From our litter, he noticed I had two white ruffles, Inky had one white spot, Stripe had a thin white stripe down his front, and Kiwi was all black. In other litters, Blanche had a white spot on her tail and Simon did not on his; Blackie and Dark Lady were the only black kittens in their litters. Axel had a white spot on his armpit as well as on his neck, while his brother Juan only had one white spot. Axel came on his lap to share his whole wheat waffles one morning when he decided to eat outside.

When researching the questions to ask political candidates, he discovered George W. and Laura Bush had a black cat at the White House.

People who don't like black cats just haven't met the right one yet. Like Friday the 13th (or 17th for Italians), black cats are a combination of good luck and bad luck, which confuses people who trust only in luck. 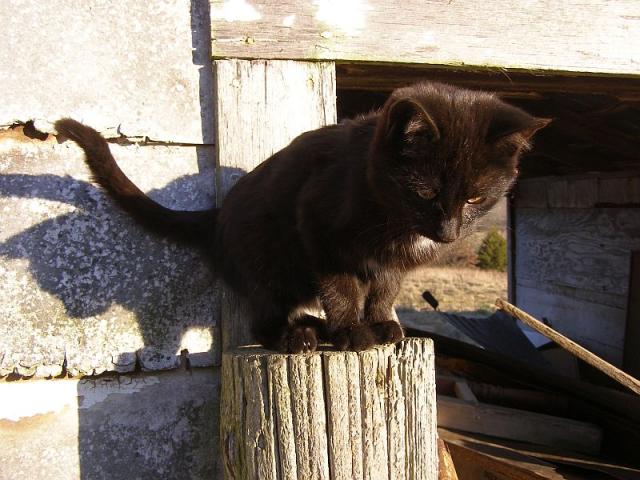 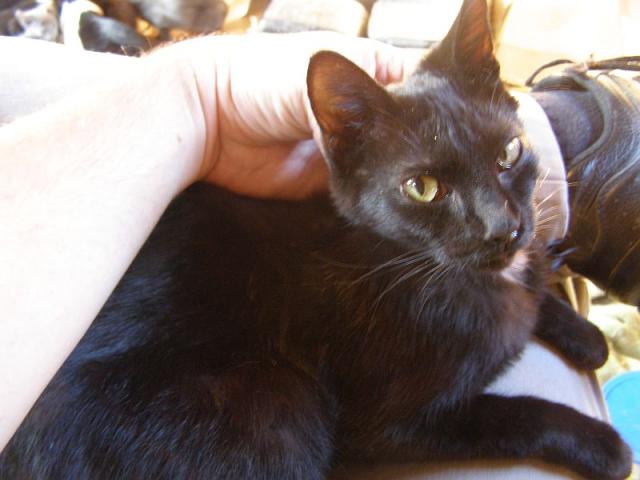