bit of a hissy fight

The other clinic cats had a minor fight this morning. This happpened while was still shut up in the vetdoctor's office, so I'm just hearing about it from the other cats.

When I got out, Parker's human picked me up to say hello, then put me down. I jumped up on the desk/counter, but Mercy hissed at me.

It seems that she was sitting next to Parker's human, enjoying being petted, when Ranger snucked around and sat on the human's lap. That was fine for a minute or two until Mercy looked and said that he was toooclose. So she growled and hissed, then they both left. Mercy went to the counter to look for snacks, but didn't like the snacks the vet tech was giving her.

Then Parker's human sat down again. Mercy came to see him, but did not want to be petted, so she went down the hall. they tried to get me to run away from her chasing my food so I wouldn't bother her. It worked.

Anyway, here are the pictures of Ranger sitting toooclose to Mercy. In the first one, you can just barely see Mercy, and you can't see all of Ranger. By the last one, Mercy is getting up and ready to convince Ranger to leave. 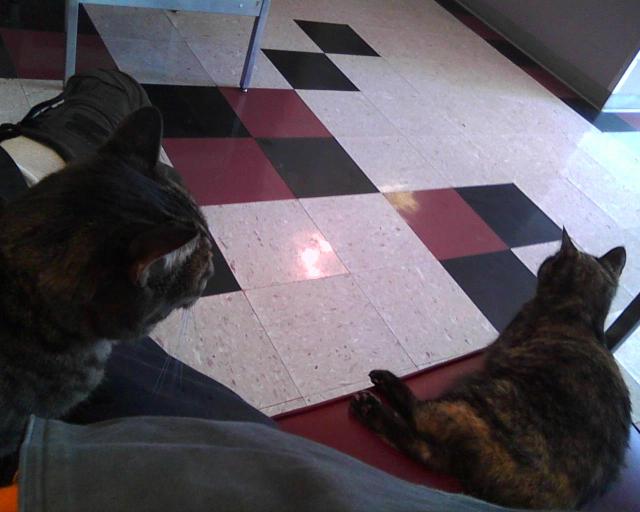 why is either one of them on his lap? that's my lap to sleep on. I used to share with the other shed cats, but now that lap is MINE.