Five years ago today was a sorta big day for me.

First, he got up early to see the kitties in the shed. I was still out hunting, so he didn't see me. He then went back in and had his brexfast.

He came out again, and I spent some time on his lap. While we were sitting there, my sister Rico was looking for a box she could get into. We didn't know why at the time. Cats like boxes, and that is not so unusual.

He had to get back inside and get on with the rest of the day, but he didn't want to chase me off his lap. So when he saw Butler sitting on the shelf above his head, he tried to get Butler to jump down on to his lap. When he jumped down to the lap, I jumped down off the lap, and then the human could get up and be productive.

When he went back to feed us dinner that day, he saw why Rico was looking for a box. She had had kittens on the blanket in the middle of the floor.

! I was almost a year old, and I was not about to have kittens of my own. I did not want to be around those kittens, so I left the shed.

He tried to carry me in one more time, but we could only get about as far as the door before I jumped out.

He did not want me to leave the farm as my father had shortly after I was born, so he had to start feeding me where I would go. Sometime he fed us on the hay bales by the shed, or in the barn, or wherever he could find me. Sometimes he saw me sleeping on the hay bales across the road. A few weeks later, he showed me he would be feeding me on the other side of the road. He tried to get the other kitties to come over there. Some other people started living in the red house, and they eventually took down our shed and our barn. He fed all of us over by the hay bales he had shown me that day.

The pictures: Rico on the shelf; Butler and my nephew Axel (or is that Truffles?) on the hay bales in front of the shed; me on those hay bales. 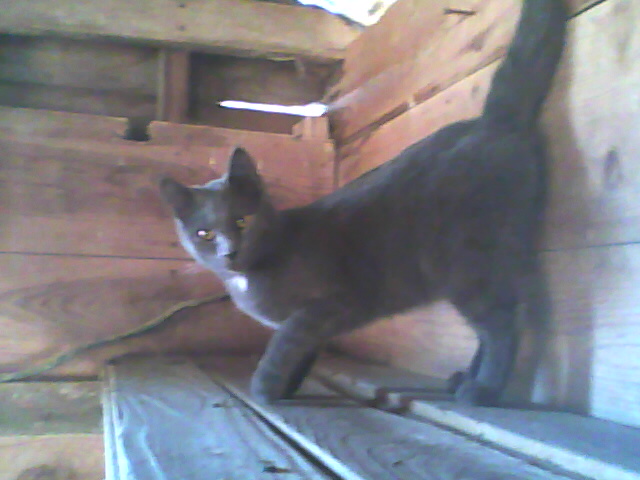 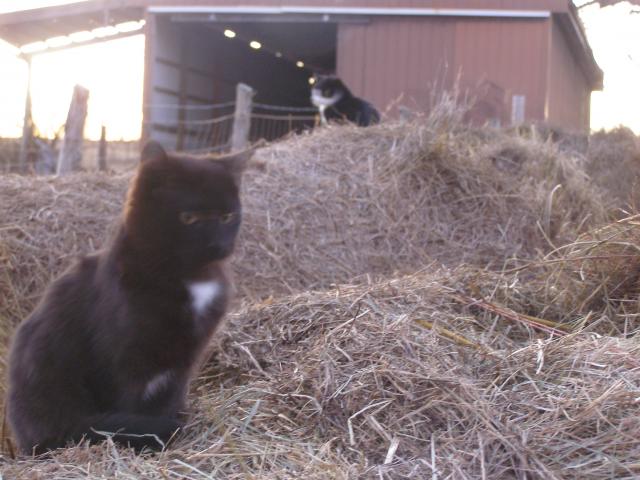 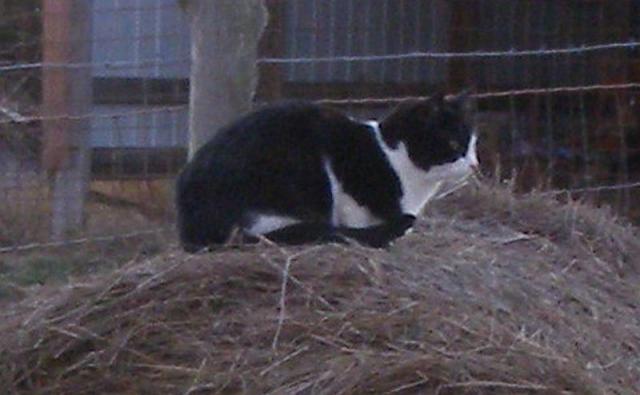 So glad you have a cozy, comfy home inside now. I hope all the kitties who lived in the shed are safe now. If my human mommy knew that kitties were living in a shed she would never have the shed taken down. About three blocks from where we live there is a very old shed on this abandoned lot. Three kitties have safely lived there for several years and some humans have been feeding them and giving them fresh water. They all seem to be in good health. Our prayer is that all kitties will find safe, warm homes and receive plenty of good food and lots of loving care. Sending you and your family my love and purrs.