This cooler weather has me acting a little crazy, as you might have guessed from the title

My human is working afternoons / evenings, and sleeping late in mornings. So brexfast is later than it's supposed to be, but I am generally okay with that, because I can sleep next to him on the bed. Except when I get up in the middle of the night and eat something that doesn't agree with me and I have to throw it up. Then he gets up early to clean it up, but doesn't feed me right away.

When he gets home, I'm often so excited to see him. I typically start meowing when I hear him or the car outside. Then I'll meet him at the door, and he puts something down by the floor so I don't get outside (like his lunch bag cooler). Then he comes inside, and I start rolling on the floor so he has to pet me to get past me. Sometimes he picks me up and carries me to dinner. Sometimes I eat so fast I throw it back up. But since I last did that, he's been giving me half my dinner when I get home and the other half an hour or two later. Sometimes I act like I want to jump up onto my shelf, but I'll change my mind after I get on his back

I'm also running around the house more. Sometimes he'll get out one of my toys, like a shoelace or a catnip toy, and I'll either chase it or kill it as appropriate. Other times, he wants to make his own dinner and can't play with me. Well, one night this week, when he was doing that, he had the cubbard open. I jumped on the counter to the cubbard shelf to the top of the cubbard. I knocked off one of his kitty knickknacks and it broke.

for a little bit, but he still petted me.

The first image shows what it's supposed to look like, and the second showes what it looks like now. 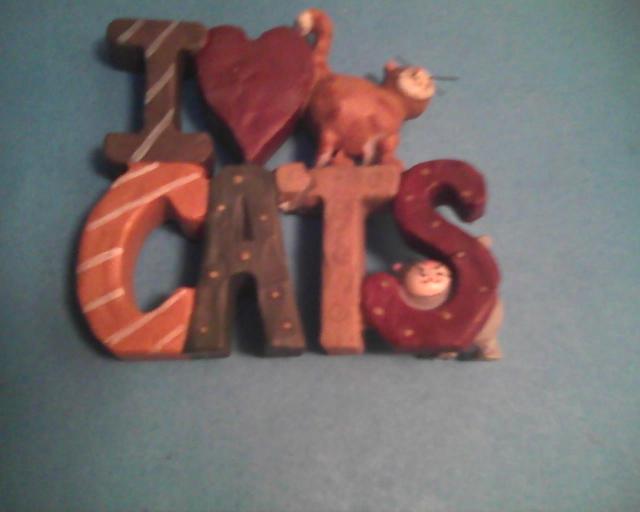 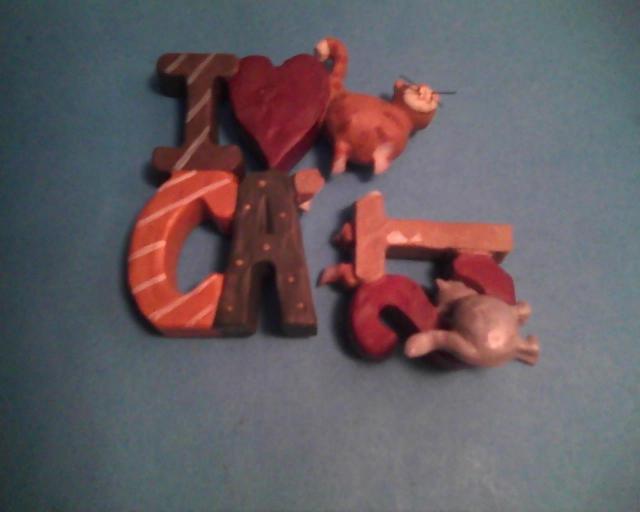