The only thing some kitties wear is a collar. I wear two. Here are some thoughts on collars.

When the four of us kittens (Butler, Inky, Truffles, and I) were fixed, he gave us collars to wear so it would be easier to tell who was fixed. We didn't like them. We tried to take them off. Truffles succeeded, so he took the collars off of the rest of us.

When I moved inside, he tried me on a pink collar again. There was a little bell on it, and I tried to bite the bell. So he took it off. Some people say the bell makes it easier for the birds to avoid getting caught by the cats. But I've also heard that cats can learn to hunt without ringing their bell. I haven't had to hunt mice or birdies since I've had a collar.

Then he tried a purple collar. This had something that smelled nice, so I did not try to take it off. He left it on for about a month, then he changed it so the smell was fresher. I don' t like the process of changing it, but I can tolerate the collar.

In fact, I can tolerate wearing a collar so well, that when I am wearing my purple collar, I can also tolerate wearing a pink collar. You can see me wearing both collars in the first picture down at the bottom. He took the bell off that collar so I wouldn't be so distracted and try to bite it off. I like it better that way.

He put a tag on the collar for a little while. It hung down, and I sometimes (but not very often) tried to bite it. Then he discovered (I guess he found it at the vet clinic) a company that makes a tag that fits around the collar. So he ordered one, and got the tag from a Parker in Texas. They fixed it and I had my tag in the next week. I like that tag better and I don't try to bite it off.

My collar has a breakaway feature, so that can come off easily if it needs to. In fact, a couple of times when I've been exploring around the house I've gotten in somewhere that my collar came off too easily. One time he found it right away. Another time, while Binx was visiting, he could not find it until he had purchased a new collar and ordered a new tag.

Some kitties have collars that have anti-flea medicine on them. I guess those work. Sometimes those cats try to take those collars off, too. Sometimes the flea medicine is doggie strength and is as likely to kill the cat as it is the fleas. So make sure you get your flea collars from your vet and it doesn't have stuff that's bad for cats.

Some kitties wear a harness around their upper body rather than just a collar around the neck. I think I saw Joey wearing a harness at the cat show. Bob the neighbor cat sometimes wears a funny looking collar, like he did the day he visited my window in the second picture below. Some might say he looks like a foool when he wears it

We had to take our collars and harnesses off before we competed in the rings at the cat show, but some of the other kitties wore collars when they were back at their home cages. I had mine off all day but wore it when I went back home.

And there are some collars, known as Elizabethan collars or E-collars (because of the old queen of England), or the Cone of Shame, that vets put on kitties when the kitties have an injury or scar that needs to heal without being licked at by the cat. Sometimes even dogs have to wear E-collars. (They don't look as good as we do.) I have never worn that kind of a collar.

Sometimes kitties can get their collar caught on something, and sometimes that can be a real problem, leading to permanent injury or death. However, if an inside kitty like me gets outside, a collar lets everybody know that I am an inside kitty, and the tag can give the people a way to contact my human who would be missing me. So if it gives me a better chance to get home, I think it's a good idea. 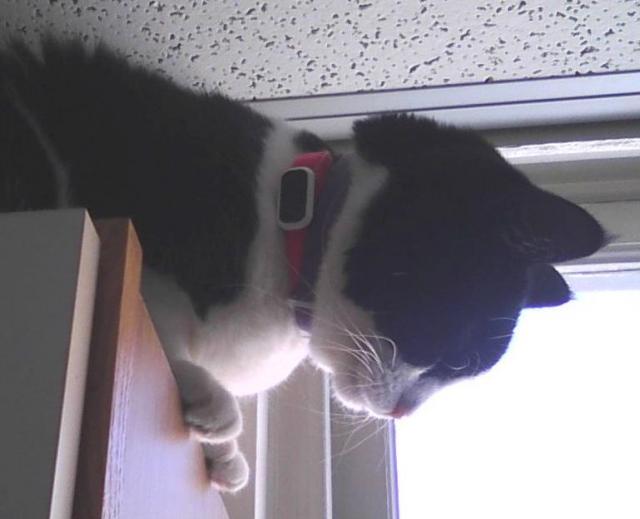 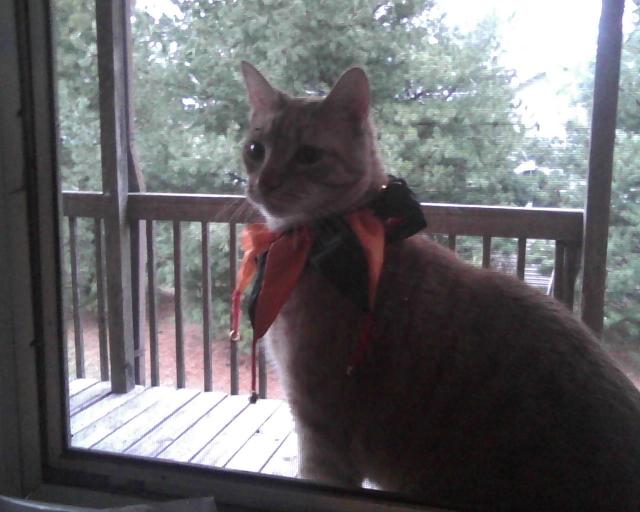