Q is for Queen, the term for an intact adult female cat, the mother of kittens.

When a queen begins her heat cycle, she will try to get her scent spread around to any tomcat who would come visit her. This may involve mrrrping, rolling around, or sitting with her tail in the air. If no toms come to visit, there is no mess and no litter. If toms do come around, they would mate. There may be more than one father in a litter of kittens.

When the queen is about to have her kittens, she will look for a place to hide so the kittens will be safe from predators and well-meaning dogs. This may be in a box, behind some furniture, under some shelves, in thick bushes, or under some scrap metal in the yard. The actual kittening process can be painful, and to the observer who can't see, kittening may sound like a fight.

When the kittens are born, the mother licks them, and there are some things that our human has never seen that get the process of lactation going so the kittens can drink some milk. The process includes licking the kittens. Usually all the kittens are born at the same time, but not always. For example, Butler was born one day, Parker and Schwarzie were born the next day, and there was a stillborn kitten a week later. Sometimes the kittens get stuck on their way out, and the cats need help from a vet or other well-trained human; otherwise, the mother cat might not survive.

After birth, the mother often moves her kittens to somewhere safer, whether that is more protected, more hidden, or more remote. Rico had trouble moving all of them sometimes (maybe she couldn't count), and dropped some before they got where they were going.

Later on, the queen teaches her kittens how to hunt by bringing live prey back to the kittens. The kitten then has to kill and eat the prey before somekitty else takes it away or the prey runs away on its own. Sometimes, when there is more than one queen, the prey gets passed around from kitten to kitten and sometimes the other grown cats might get in on the action. 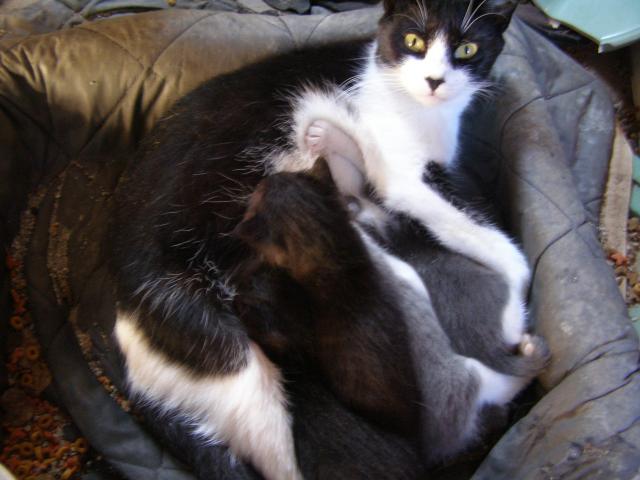 I remember the mice you brought back. Once I got one, I didn't want anykitty else to take it away from me, or even get close to me.