V is for veterinarian. Those people we don't really like to see. Come to think of it, other than our own humans, we don't like to see many people, especially if we have to ride in the car to get there. But veterinarians and their vet techs do so many things to cats that most people wouldn't. They look at us in weird places, they stick weird things in us (sometimes it hurts), they often have offices that smell like dogs. And they give our humans strange things to give us.

But sometimes they help us. They give our humans things that keep the fleas and ticks away. They tell our humans what to do so we can sleep through the night. When we're really hurt or sick, they do things to help our bodies heal. They give us funny looking cones so we don't hurt ourselves before we're done healing. They sometimes take in homeless cats that need treatment or homes. They tell humans how to act so we don't hate them so much. And sometimes they give us treats. Maybe not really tasty treats, but treats.

And there are other people in the office who know almost as much about cats -- the vet techs. At many vet clinics, the people answering the telephone and doing the day-to-day office tasks have training in working with animals as well. So when you call the vet's office, the first voice you hear is often not that of just a receptionist. Techs just didn't spend as much time in school before they went into the animal workforce. But sometimes when a call comes in, they will research what they think the problem might be.

But there is a downside for vets. Vets see so many animals die, and see so many humans who lose dear family members. Sometimes when the animals come in there is absolutely nothing they can do. Veterinarians have a higher rate of suicide than the general population, including well-known vet Sophia Yin. There was one study that showed that among white American men, vets were the fourth most likely profession to commit suicide, trailing only dentists, physicians, and marine engineers.

I have a hard time at the vet, they think my mom might have been feral and I freak out when I get there. I am learning to calm down now. There is only one vet tech who works with me now. She comes in and talks to me and spends as much time as needed with me until I calm down and relax so then she can touch me and examine me. Then Chicken man, I mean the vet comes in and he spends a few minutes getting me to relax and then I am fine with him. He says I get better and better all the time. I am fine in my own home but not when I leave my home. My landlady can pet me and just scoop me right up with no problem., Kitty Kisses from Seshat

I like to hide once I get in the exam room. I was the first pet to hide under the new table. (The top moves up and down, and they were able to roll it away to find me). Now they just leave me in the carrier until it's time to do something to me. 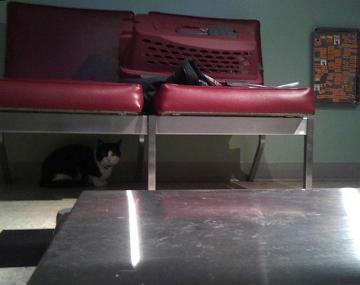