T is for Tuxedo, Tabby, and Tortie (tortoiseshell). These are three coat patterns that are common in cats. Tabbies can be tuxedos, tabbies can be torties, but tuxedo torties usually come out calico. These do not refer to breeds, and these patterns can occur in many breeds, in long hair or short hair varieties.

Tabby cats are typically striped, but may also be spotted or have a mackerel pattern. Tabbies also have an M on their forehead. Tabby will show through on orange cats. The pattern is usually symmetric; this can be most easily seen by looking at the thick stripes on the front legs. For many tabbies, each individual hair in the fur is striped. Tabby can be hidden behind the white of a tuxedo. In other cases, the M pattern can be seen by looking at how the hair lays differently, or the stripes only show up on a night-vision camera. Torbies (tortoiseshell tabbies) usually show the tabby more in the orange than the black.

Tortoiseshell cats, or torties, are typically female. The gene that controls black/orange fur is sex-linked, so females will have two copies and males will only have one. If one parent gives a black gene and the other an orange gene, the colors will both appear in certain regions, determined randomly. However, if the cat is cloned from one cell, only the active color in that cell will activate in the clone. If the tuxedo trait is present, the black and orange tend to be grouped into distinct regions, and the calico patterns appear; if not, then the black and orange spread and mix all over the cat.

Tuxedo cats, sometimes referred to as Felix cats (like the cat in the Felix adverts in the UK) or piebald cats, have the gene for white spotting. Tuxedo cats are usually black and white, although some could be grey and white or tabby and white (tabby-and-white cats are usually just called tabby). Often, these cats will have four white paws. Skin color also may be black and pink, and toes and paw pads are often but not always a mixture of black and pink. Some tuxies have long sleeves; others have more white and are more like an evening gown than a tuxedo. Sometimes this white gene only shows up on the front of the neck, (or maybe one or two other places) and the casual observer would call the cat black.

Shown here are Ranger (tabby), Mercy (tortie), and me (Binx, tuxedo). We all live at the vet clinic. (picture of Mercy & me from the clinic facebook page) 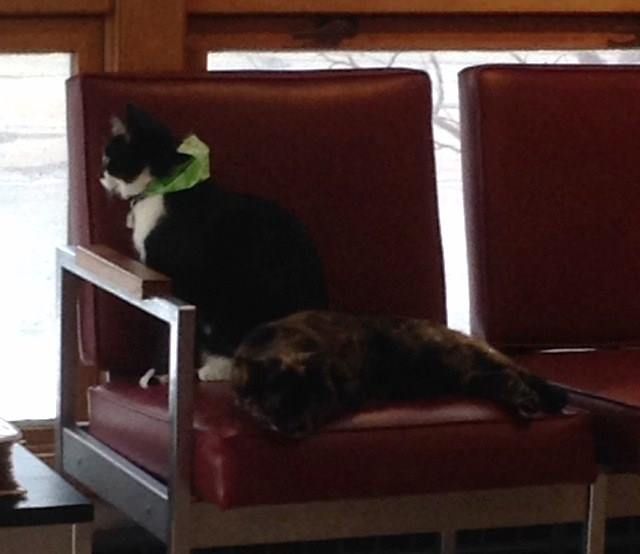